Focus on the Sky
of ancient Egypt

In the intensely dark night, our eyes get lost.
they scan the slightest source of light - in search of a marker.
From Earth, we contemplate the Sky. From space, we admire the Earth,
the Moon, next the planets and the other small bodies of our Solar System.
But what would we feel beyond this physical border?

The sky visible with the naked eye from Earth

Here begins our journey in the Universe... On the surface of our Earth. Move away from artificial lighting, turn your eyes to the sky and contemplate the many points of light that dot the darkness, the void, the infinite, the unknown ... Their colors, their brilliance differ, their spatial distribution as well. So that our ancestors have grouped them into constellations displaying for most animal forms (Ursae Majoris, Draco, Canis Majoris, etc.), for some human forms (Orionis). All seem to be distributed on the surface of a sphere centered on our Earth. Our journey will show that this assertion is only an illusion, however...

Two-dimensional representation of the local sky at the present time.
Turn your screen towards the South, define your observation location by filling in the corresponding fields (latitude / longitude) or by clicking on the "Here" button then observe the starry sky as it appears to you at the present moment. It is possible to modify the place and time of observation, the display mode of the planets of our Solar System and to zoom in on an area of the sky (*).

The Earth, this thin crescent of light

In the age of NewSpace, let's take a ticket to space. Let's embark aboard a space shuttle. Let's put on our suit, our helmet, and sit comfortably in the seats provided for this purpose. The engines light up, the rocket shakes. 3, 2, 1 ... Go! Here we go. The flight is nominal. After a few hours of cruising, we are already 50,000 kilometers from Earth. At this precise moment, our planet appears to us under the aspect of a thin crescent of light, relatively close to the constellation of Orion and the star Sirius. 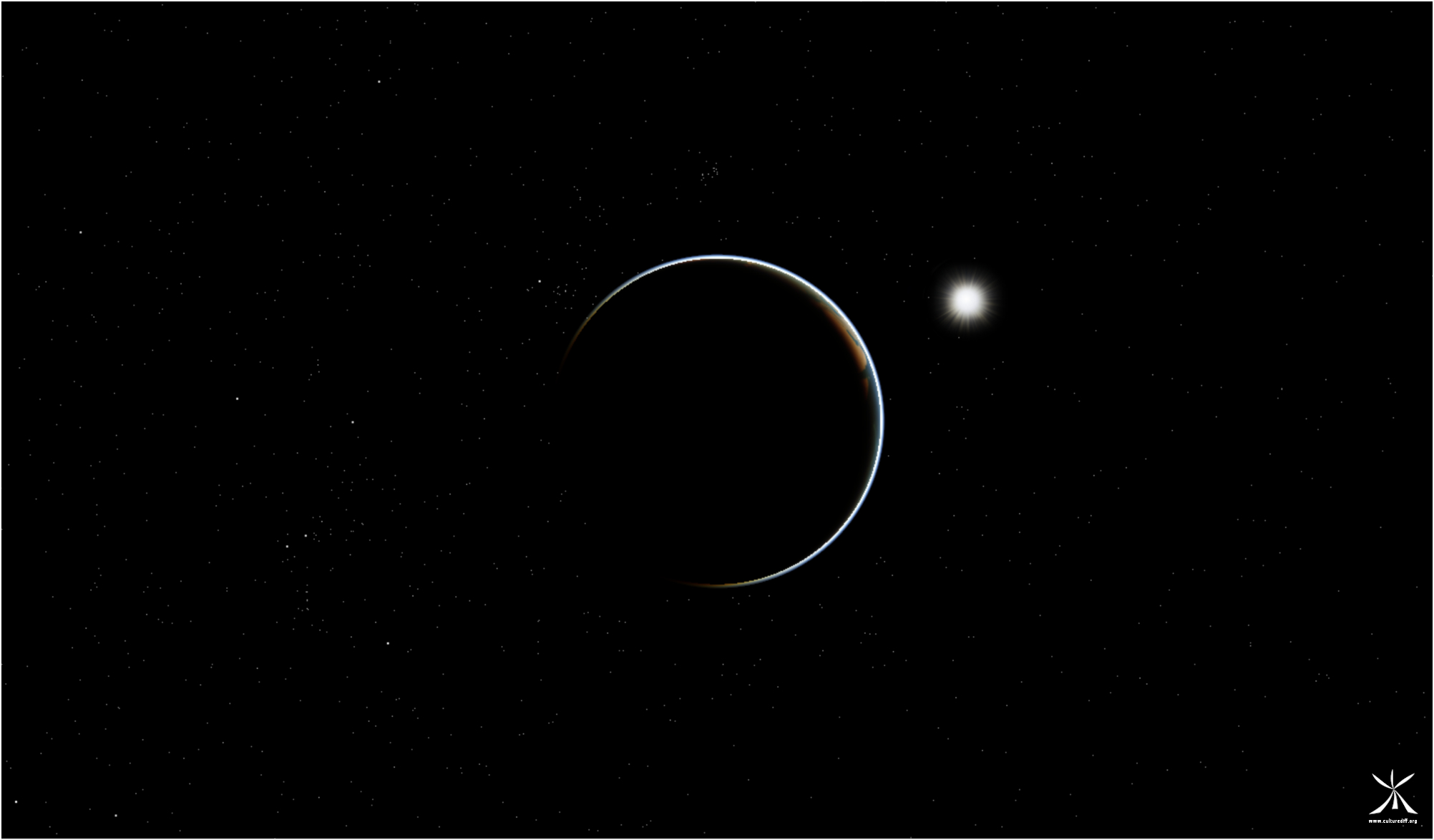 This 3D view of the Earth illuminated by the Sun, surrounded by the constellation of Orion and the star Sirius, is the result of numerical simulations combining satellite images of the Earth and algorithms of positioning of the objects (Earth, Sun, stars) on the celestial vault. It simulates a view acquired on March 31, 2022 at a distance of 50 000 km (**). In the absence of any light pollution, the Earth appears as a thin crescent of light.

The Earth, one of the planets of our Solar System

As we move away from our Earth, various objects of different sizes and colors appear within our field of vision. These are the other planets of our Solar System. Some are rocky - such as Venus and Mars, others are gaseous - Jupiter, Saturn and Neptune, for example. But all of them are located close to a plane called the ecliptic, centered on the Sun. 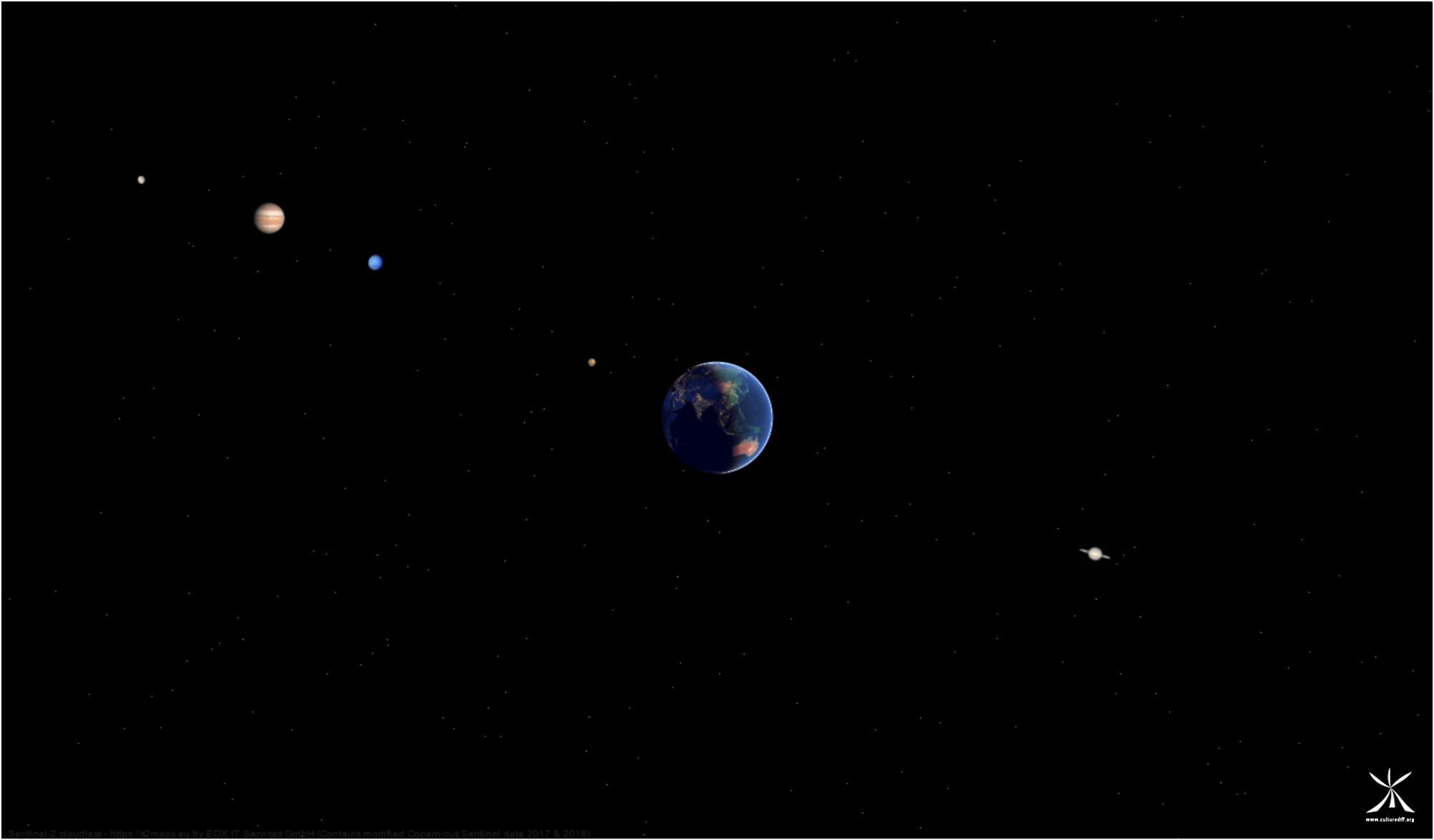 This 3D view shows the planets Venus, Jupiter, Neptune, Mars, Earth and Saturn illuminated by our Sun. It results from numerical simulations combining satellite images of the planets of our Solar System and algorithms of positioning of the objects (Earth, Sun, planets, stars) on the celestial vault. It simulates a view acquired on May 5, 2022 at a distance of 150,000 kilometers (**).

In search for other worlds ...

Like the Voyager probes, we are now leaving our Solar System. A light beep informs us of the crossing of the heliosphere. To be continued ...

(*) This simulation has been done with the d3 javascript library allowing to visualize data - celestial data in this case. The script used to design and display the skymap (d3-celestial) was borrowed from Olaf Frohn. It is distributed under the BSD OpenSource license.
(**) This simulation was performed using the WebWorldWind interface developed by the NASA/ESA consortium and distributed under the Apache 2.0 license.