Focus on the Sky
of ancient Egypt

[Software] Dates of heliacal
rising and setting of a star

[Software] The astronomical
source of orientation
of a monument

I prepared my doctoral thesis on the theme of ancient Egyptian astronomy under the direction of Sylvie Roques, CNRS Research Director, at the Laboratoire d'Astrophysique de Toulouse-Tarbes (LATT), a joint research unit of the University Paul Sabatier of Toulouse and of the CNRS (UMR 5572), which soon became the Institut d'Astrophysique et de Planétologie (IRAP, UMR 5277).

Thesis Title: Design of a model of star visibility to the naked eye. Application to the identification of the old Egyptian decans.

Summary : On the interior lid of sarcophagus, on the outer surface of water clocks, on the ceiling of temples and tombs dating from the year 2100 to the year 50 BC and built all along the Nile Valley, between Alexandria and Aswan, there are twenty stellar clocks and eighty star lists in the order of their heliacal risings, night risings or culminations in the southern meridian. Because their heliacal risings occurred at ten days intervals, these stars have been termed as decanal. Their identification with the stars visible to the naked eye (of apparent magnitude lower than or equal to 6) of the Hipparcos Catalogue required: 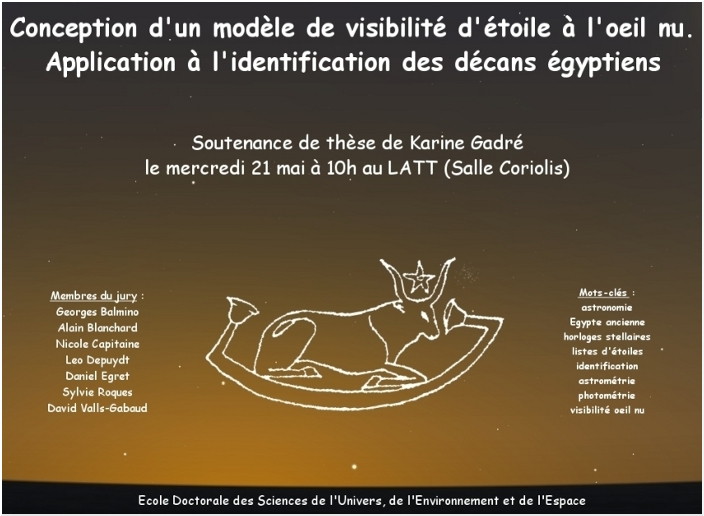 This research work allowed to draw up a map of the southern sky of ancient Egypt. He also helped to refine the dates of the beginning of the reign of several pharaohs (Sesostris III, Amenhotep I and Tuthmosis III), to better understand the division of time in hours, etc.

Thesis defending : My thesis defending was held on May 21, 2008 at the Laboratoire d'Astrophysique de Toulouse-Tarbes before a jury made up with six astronomers, physicists and one Egyptologist:

My thesis defending resulted in the granting of a Ph.D. in Astronomy of the University of Toulouse.

Reception of an Award of the Academie des Sciences, Inscriptions et Belles Lettres de Toulouse on December 7, 2008 at the Hotel d'Assezat, Toulouse, for my doctoral thesis dedicated to ancient Egyptian astronomy.

On this December 7, 2008, we were 24 "young" PhD graduates to receive an Award of the Academie des Sciences, Inscriptions et Belles-Lettres de Toulouse. Here is the text pronounced by the President of the Academy: « The Academy Award crowns the work of Miss Karine Gadré on a proposal from Roger Bouigue, Honorary Director of the Astronomical Observatory and University Professor. Miss Gadré designed a book entitled "The conception of a model of star visibility to the naked eye. Application to the identification of the old Egyptian decans." The author of this thesis uses our current knowledge in the field of astronomy for "sorting" the stars used by the Egyptians and preparing all the tables similar to those which came to us in the hieroglyphic form, these tables making genuine "star clocks". From a scientific standpoint, the work of Miss Gadré is a real working basis for better training the future researchers in the field of archaeoastronomy, and secondly, it promotes the development of a closer collaboration between Egyptologists and Astronomers. »

A medal bearing the likeness of Pierre de Fermat and engraved with the name of each winner accompanies the certificate Prize of the Academie des Sciences, Inscriptions et Belles-Lettres de Toulouse.